Not really a 'hack' per se, still 'Warst' related and too nice to not have it out. And if this isn't 'otherware', I wouldn't know what is... 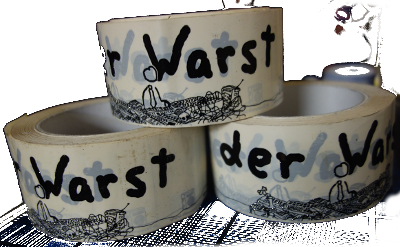 In 2005, I recorded my 5O5O5O Album. The release was planned for my birthday, which happened on 05/05/05. I wanted it to be a big event, so I thought about ways of making this happen. Obviously, I played a live show and my friends sold drinks and I behaved like a dick because I was way too excited to actually thank them for helping me out that night. Not nice. It still gets mentioned occasionally and I'm still not proud of my behavior that night.

What I am proud of, though, is that crazy idea I had for decorating the train waggon standing at the shore of the river Main in Offenbach, where the party was to happen. It has now turned into a very nice venue where I played repeatedly and taught a workshop. first I was tinking about getting stickers made, until I learned that it actually is quite easy to get printed sticky tape. They actually came about a week after the party, which was kind of all right, because the album also wasn't finished then.

The minimum order quantity was 72 rolls, which means that there are still a few rolls left of the original batch. After 9 Years. They make for great birthday presents, and are very useful for packing boxes. I usually try to have at least one roll around when I'm playing gigs, just in case something needs to be stuck together. Also, they are great advertising tools. People quite often ask to get a strip of tape on their backs and run around with them for the rest of the night.

They are also nice for confusing people, because they usually expect something else when I ask them if they're interested in a tape of mine.