The VA-10 is a curious keyboard and as far as I can tell, it is quite rare but most of the time not too expensive when bought used. After all, it still is a cheap plastic Casio keyboard. I have seen it advertised as 'rare' and 'vintage', though, so it wouldn't surprise me if prices went up significantly at some point 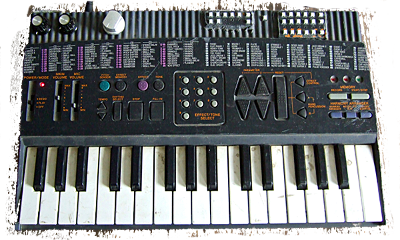 Its sounds and design are pretty much in line with the Casio SA-XXX range, which is a bit of a shame, because these keyboards are probably casios most 'unprofessional' instruments ever. Their voices tend to be thin and annoying (which doesn't necessarily have to be a bad thing, just saying...), and they are made of the flimsiest plastic imaginable. Besides, they don't come with much potential for bending, either. Whenever you short pins on their sound chips, most of the time they will crash instantly. In about one of ten cases, they at least emit a torrent of random irreproducible sploinks while crashing, but that's about as far as you get with them (please prove me wrong, if you will). I'm not too much into really aleatoric bends anyways, which is why I didn't bother too much poking around the sound chips.

The great thing about the VA-10, and what sets it aside from its dumb siblings, is the pretty elaborate multi effects processor/vocoder section, which can be either used to process external signals or the inbuilt voices, depending on the chosen effects. To my knowledge, this feature doesn't exist with any other Casio keyboard before or after that, bare any other manufacturer. This is where the fun really begins. It's strictly Lo-Fi, meaning that there's lots of grainy aliasing going on all over the place. While most people would probably consider this a flaw, I think it adds a whole lot of atmosphere to a sound. The effects range from basic reverbs and delays to really crazy over-the-top modulation stuff I haven't heard anywhere else so far. Some effects parameters are editable to an extent, too. Not very deeply, but useful. Even in its 'plain vanilla' state, this keyboard can be lots and lots of fun. Feedbacks between microphone and speakers can produce the most amazing eerie and 'alive' feeling drones.

These feedbacks were my starting point with modifying the VA-10. I figured that if you can have a feedback going on between microphone and speaker, you can probably also wire one up internally with a pot to control its impact. Which is what I did. For quite a while, this was the only mod I had on this keyboard before at some stage I started messing around with the effect section's ram chip. This was the first time I've ever bent an effects processor, so it was quite exciting (still is). I didn't really have idea what the pins of the chip would do. This was before I knew that looking up datasheets can be very helpful. So I thought it might be a good idea to build in a patchbay.
Which it wasn't. It was a waste of time. I guess it's just an interface that doesn't resonate with me very well, you can read more on this here. It basically made me literally not touch this keyboard anymore for a few years. Even though I knew how much potential it had...

The VA-10 is more or less the most 'ghetto' build I've done. I always considered it a bit too big in its original state, which made me chop off the speakers one day so it takes up less space. I built a new bottom plate for it, but I couldn't really think of a good way of closing the sides, so I left them open. This and the shoddy plastic build quality made it a bit 'temperamental' over time. The fact that I was touring with it quite extensively probably didn't help, either. Some day, I guess I'll have to get around doing some major maintenance on it...
Modifications:

Most of the bends I've found on the VA-10 have pretty much become a staple for the multi effects I've bent afterwards, which isn't too surprising, since they all share a similar internal architecture.

Because of their Lo-Fi character, probably working on an 8 bit achitecture, the effects have a very unique sound, which gets even more noticable once the bends come into play. I have used the VA-10 a lot for modulating my voice, with some fx in place and the pitch bend turned all the way down, it sounds like I'm transmitting from the moon. There's lots of ways of chopping signals up, which works nice with beats for breakcore weirdness and stuff.

more pictures and videos as soon as I get to it.

I would love to see these mods and how you wired them up. I too am in the middle of a bend/mod on a couple of VA-10s and I am looking at wiring them together to double the potential (mostly for feedback).

Any photos or diagrams of the wiring and pins/lines you found for the bends would be much appreciated.

Would love to hear some samples of this bend too.

Ha, a couple of VA-10s. That sounds like a crazy idea. Let me know how it goes.

Basically, what I did was look at the datasheet of the RAM chip. I don't remember its name and I don't feel like opening up my VA-10 right now, but it's the big IC on the upper right corner of the main pcb. As far as I remember, it's pretty standard and should be easy to find on the cyberwebs. Just look at the pinout diagram. Address lines cause all sorts of rytmical/overtone glitches and data I/O lines create noise and distorsion. pretty much as in my de scrption.

Yeah, Samples. I really need to get up my lazy ass and record some. I'll see that I'll upload some stuff in the next few days.