I bent this funny little puppy as a commission for my very good friend Ernst Markus Stein. In his kitchen. With a bare minimum of tools and the most crooked soldering iron I've ever had the displeasure of holding in my hands. 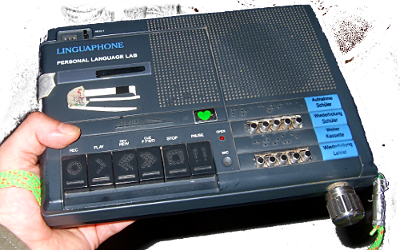 The Linguaphone is a curious tape player with an inbuilt 8bit sampler that's made for learning languages. The sampler either repeats short phrases from the tape [Wiederholung Lehrer] or lets you record from an inbuilt microphone [Aufnahme Schüler], to play back whatever you recorded [Wiederholung Schüler]. Ernst Markus found it on a fleamarket in Berlin. He showed it to me when I was visiting him and I was hooked immediately. Unlike him, I don't have much to do with tapes, but I must say, this combination of digital and analogue low fidelity in one single package, made for a completely different purpose than producing music is absolutely genius. So from the second I saw it, leaving it as it was was not an option. So the next day, we cycled to the local Conrad to buy parts, which I do not recommend: waaay too expensive. On our way back, we got stopped by the police for crossing a traffic light that had only just turned red when we were already half across the street, but try explaining this to Berlin cops. Waaayy even more expensive. Kinda unrelated, though...

Once we were home, I got straight to work, as usually replacing the samplers inbuilt crystal with a ltc1799 clock circuit, thus making the sample rate and recording time variable. Also, I modified the speed dial for the tape motor to cover a wider range, so now both tape player and sampler can be pitched continuosly from ridiculously fast to very, very ssssssslllllllllloooooooooooowwwwwwww. By wiggling both around for a bit before hitting [Wiederholung Lehrer], you can create samples that warble all over the place like crazy.
I also built in a bending matrix of 10 switches that add different loop points, tonal changes and overall digital mess to the samples.

Since I don't own the Linguaphone, I can't make any pictures or videos of it at the moment, but Ernst Markus is using it very frequently when he's out and about in Berlin. So if you happen to be around there, and you see a guy doing pretty amazing/annoying stuff with a strange tape player, chances are it's him and the linguaphone.

John Bannister, who commented below, filmed Ernst Markus playing the Linguaphone when they randomly met in France:

Here's what he wrote:
It may seem quite peculiar that I came across your site but I was so impressed with the instrument every so often I would remember it and try to find one on ebay myself… i pretty much spent most of that holiday in Paris at flea markets trying to find one!! I found your site when googling linguaphone images to try and find out what model Markus had and came across yours and was pretty sure it was exactly the same one! Bare in mind this was 2011 that I first saw it…I was pretty impressed!…

Ever since I built it, I wish I had one of myself. Then again, I already have so much stuff lying around, so it's probably for the better it lives with someone else. Still, if I randomly saw one somewhere, I'm pretty sure I wouldn't be able to resist..