To be honest, I was never much into Kaoss Pads. I always found them to be slightly overrated and vastly overpriced even for used ones. Also, they always sounded a bit too 'clean' for me. 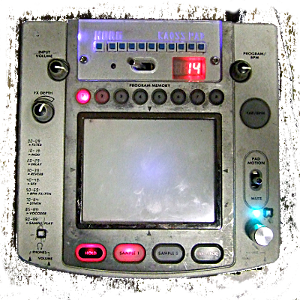 This one came to me as a lucky accidental ebay bargain. Sometimes, there's auction texts that just ooze ignorance. A lot of people sell things as broken because they are either too lazy or too dumb to figure out how they work. Here, I just bid some random amount of money, then forgot about it and in the end surprisingly won it for £29 because the vage seller's statement "It works fine but I think there's something wrong with it" apparently had scared off most of the other potential buyers. After it arrived, I tested it thouroughly and realised it was a classic example of the problem sitting in front of the machine.

The problem with circuit bending is that most of the time even when you think you know what you're doing, you actually don't. So even with several years of experience, casualties can happen just as easily as on the first day. This applies especially for 'newer' devices, as a lot of them seem more prone to break due to static electricity. With that in mind, I approached the Kaoss Pad with extra caution, because I didn't expect to get it that cheap again.

It turned out to be a moderately easy, quite stable bend. Where the Kaoss pad at times seemed to be a bit tame to me, with the new switches connecting to the ram chips address lines, there now is a whole lot of digital grit added. Slowly or quickly building feedback swooshes, ringmod-like tonal effects, sudden bursts of digital crunch, static crackling, robot voices, etc. Every effect, tone, loop, etc. can also now be pitch bent as it happens, effectively adding another real-time-controller to the pad. Because of the relatively powerful ram cip used in the KP2, the loops that can be created with the instant loop switch get quite long and confusing, but can be shortened down with some of the address line switches. Great for weird sci-fi sounds. These loops also can be manipulated both with the X-Y-pad, as well as the bend switches.

I am currently using the KP2 a lot. It's incredibly versatile and can be played very musically. Whether playing full-on harsh noise, plugging in a mike and jamming along with other musicians, or adding some FX to a DJ set or an acid trip, it fits everywhere. I've had it lying around the living room with a mobile speaker connected and now all my housemates have fallen in love with it.

This may not sound like very much, but it makes a hell of a difference.

Any tips for bending these? I assume the RAM chip is where I should put most of my focus, but is it worth putting in a patch bay? Or most bends just go to ground?

Any hints on the instant loop switch?

Hey, I was wondering if you are willing and able to install these bends in my KP2?

I'm sure you are pretty busy, with a lot going on, but if this is an option, please let me know.

Also, do you have any videos of this guy in action? I would love to see!

Hey Charles,
I'd definitely be both able and willing to bend yours, provided you are able and willing to pay a certain amount of money for this service. :)
Also, I hope you realise that I'm based in Berlin, so I'm not too sure how feasible it would be to actually send yours here and back. Maybe we should discuss this further via email. I made a video of it ages ago, but I can't seem to find it any more. Also, my camera's broken right now. Actually, I wanted to upload waaaay more videos of all my gear, so thanks for reminding me...

Published on 09.12.2014, from Berlin
Write a reply
Cancel reply
Write a Comment