The npad is an USB keyboard that you can type the letter 'n' with. It doubles up as a funky blinking ambient/annoyance light and it sports an USB 1.0 Hub, for additional uselesness.

The idea of building a keyboard with only one key had been lurking in the back of my brain for ages. As with most of these kinds of projects, I just needed a good excuse to get going with it. Presents for loved ones usually do well for this.

In this case, it was a christmas present for Eva, my ex girlfriend (she also came up with the name and she made the video which you can see on the left). I took some inspiration from her film ' n arratives'. My aim was to reproduce the 'station ID logo', appearing in the film's upper right corner, as closely as possible. I tend to forget to take pictures while I'm building stuff, this time, I took loads, but then lost them together with the phone I took them with. Which admittedly doesn't make much of a difference in the end...
Oh. Well.

This means I can only write about how I

For a few years now, keyboard keys have been a recurring element in my sculptural work. I built objects entirely out of them, e.g. the sculpture 'old order', which you can see to the right. They have also been parts of bigger structures occasionally, where they formed islands, were washed in washing machines, etc. Whenever my imagination gets triggered by a certain 'material' (the word 'material' in my book accounts to pretty much anything that's around), I try to get a great big pile of whatever it is, in case I wake up some night with an idea what to do with it. Most of the time, I have no idea why I am fascinated with these things to begin with, so working with them is usually how I find out what they are supposed to 'do' or 'repesent' in a specific artwork.

In order to get a massive amount of computer keys, I had to take apart quite a lot of computer keyboards I got from scrapyards. Most of the housing and mechanics and stuff went straight back to the bin, but sometimes I kept the electronics. Just in case. 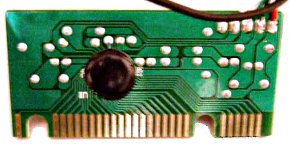 This came in handy when I started building the nPad, because I already had the most important part I needed. I don't remember which keyboard I took the circuit board off, only that it was small enough to fit into the half of a wall wart power adapter which I used as the housing of the npad. I found out how to type the letter 'n', simply by connecting it to a computer with a text program open and then going through all possible connections with an alligator cable one by one until I found it.

I printed the 'n' from the station ID in the right scale so it would fit on a keyboard key, stuck it on the key and cut it out of the keys' face with my dremel. After taking the remaining paper off and cleaning the edges, I stuck some sellotape on it and filled the cavity with 2 component epoxy glue. After the glue had hardened to a nice even surface, I took one of these brilliant blinking RGB LED's and glued it in from the back, right under the 'n'.