I pretty much only use the Game Boy as a musical instrument or very rarely as a camera, but since quite a few people would probably argue that it can be useful for other things as well, I put it in the 'Otherware' category. 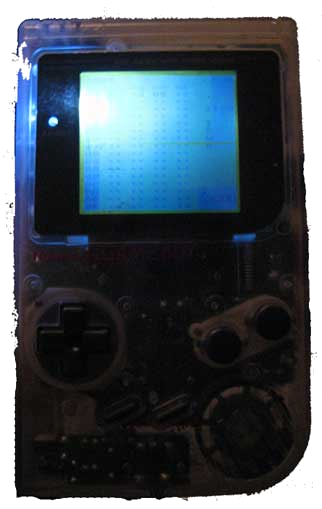 So yeah, here's some boring history lessons about my 15 seconds of chiptune ghetto internet fame: It was around 2004 when I slowly started to grasp a few broad concepts of the wonderful, yet fairly complex Gameboy music program Little Sound DJ. Destined to take my (then: very) humble musical creations into the world, I entered those dark stages and sure enough had to ask for extra light all the fucking time!

This had to change.

So I decided to take my Gameboy apart and build a backlight into it's screen. After successfully doing this, I felt inspired and generous as well, so I decided to write a tutorial about the modification.

You can read the full tutorial here!

And Lo and behold, I was the first one. Well, actually, I don't know if I was the first one to have built this sort of backlight, but I am pretty sure that at least I was the first one to have published a tutorial about it. Remember, that was back in the olden days, when wheels were octagonal and the internet came from a huge vibrating box in the basement. Since then, whenever I feel the world doesn't exactly give a shit, my website statistics prove me wrong with the heartwarming feeling of a few hundred visitors each month from that one link in the LSDJ Wiki.

'Twas a few years later, I had just recently discovered the ltc1799 and started building it into every machine I had lying around. I'd seen some underclocked Game Boys around earlier where people had replaced the original clock crystal with one having half the frequency to tune it down.

But as far as I know, no one had attemted to make the pitch shifting continuosly controllable. So one night, I decided to try if it's possible, which it was. I actually had worked on finishing this and other stuff all through the night, so by the time I recorded and uploaded the demo video in the morning, I was very tired, which made me sound a tad bit confused.

Regardless of this, the video remains my most popular Youtube upload, although I don't really know if this is in its favour or just means all my other stuff is badly advertised and uninteresting. It probably has a lot to do with it being related to chiptune stuff, which seems to be so mainstream now, it really makes me wonder if the people wide-eyedly asking me:"What? You can make music with a Game Boy?", have been living under a rock until a few hours before I met them.

To be honest, for me, this was just a proof of concept and I took the one from the video apart a while later when I needed a ltc1799 for another project. I didn't really consider it useful enough to have a pot sticking out of one of my Gameboys. A while after I uploaded the video, I saw a few Game Boys pop up here and there, that people had actually cared to build the mod inside and by now, it seems to be a rather standard mod to build in. Maybe not as standard as backlight or pro sound, but still common enough.