It was in the Summer of 2009. My then-girlfriend Eva had been on vacation in France from where she brought back a fisher-price 'Laugh and Learn' toy telephone that I instantly fell in love with. 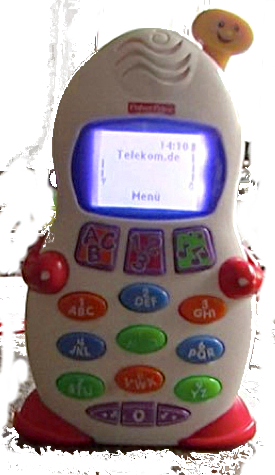 It was just soooo incredibly cute, and it spoke french, and it taught you all sorts of useful things about numbers and letters and stuff. It also had a setting that played bleepy songs and one that made it say charming things like 'Bonjour' and 'Je t'aime' when you pushed a button. All this was accompained by lovely minimalistic animations on a green 5x5 LED matrix.

I filmed some of the animations and I'm still regularly using them as loops for my visuals. Of course, I also opened it up to see if it has any bending potential. Which it did not. There was only one big chip with lots of tiny pins inside that wasn't too much fun to play with. I could probably have done a LTC1799 pitch shift mod, but I didn't really have the time. Besides, it wasn't even mine.
What I noticed, though, was that the housing was quite spacious inside, which got me contemplating the possibility of actually hacking it into a real, functioning telephone.
About one year later, Eva was about to finish her degree with the wonderful film n arratives and I decided that this would be the perfect opportunity to see if I'd be able to build her the silliest phone ever as a present.

A problem I came across was the fact that the 'Laugh and Learn' has fewer functional buttons than most modern mobiles. I wanted to change its outer appearance the least possible, so adding new buttons was not an option. Knowing Eva as an avid fan of rather basic, 'dumb' phones made things a lot easier. In fact, the everyday mobile she had at that time was only one or two generations from the Nokia 3330 which I ended up using for the project.

The 3330 was the direct percursor of the 3310, which as far as I remember, was the most popular mobile of its time and actually the model which marked my own transition to 'a person with a mobile phone'. I had the opportunity to use it occasionally when my earlier girlfriend Uta lent hers to me so I could call her to tell her when I'd be coming home from uni. Yup, there's a lot of rather unrelated personal history attached to this. What is important in this case, though, is that I was fairly familiar with the 3310/3330's keypad layout which is why I expected it to be adaptable easily with only a few modifications.

And this turned out to be quite true. It was my plan to write a nice, long, and informative article about what I did and how I did it, spiced up with vibrant pictures of the work progressing. However, as with the npad, all those great pictures were lost with the phone I took them with one dreaded night on the 345 Bus. Which is a bit funny, because, heh, you know, 'oh the irony', you know, loosing the photos of the phone with a phone... I'm gonna shut up now.
Still, I've decided against the long, informative, and possibly quite funny article, because without images, it would probably turn out mostly boring nearing on incomprehensible.