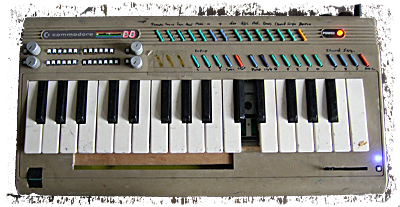 Its guts started their life as a Yamaha SHS-10. A cheesy 80's keytar which would have been bad enough already, but mine looked even worse because its former owner considered it a good idea to paint it with a water-based black varnish that kept scratching off. I suppose this was pretty much the reason why I got it for 4 Euros on the lovely fleamarket in Offenbach. I'd say it probably is worth a bit more, but absolutely not the ridiculous amounts of money people are prepared to pay for these on ebay nowadays. So if you find one for cheap, you can actually make a small fortune selling it. I guess most people buy it for the MIDI output, so they can play their synths or computers with it while spazzing around the stage like the jerks they are. Oh well...

I was never too fond of hanging a keyboard around my neck. I really wanted to use it at the bent fest 2008 in LA, but here the size turned into a serious issue because it was way too big to comfortably fit into any of my suitcases. It had to be rehoused.
I had a broken C64 lying around from an earlier abandoned project and found that it had just the right size to accommodate the circuit board. The original keys were a bit too small, though, so I replaced them with the ones from a different broken Yamaha Keyboard which had the same wiring.

The SHS-10 is based on a simplified 4 operator fm synthesis, which was Yamaha's big thing at that time and can be found all the way from the flagship DX-series to cheap plasticky toy keyboards. Even with having a MIDI out, I would definitely sort the SHS-10 into this category, as it is a far cry from anything people consider 'professional'. All the sounds are presets, most of them horrible, some surprisingly deep. The rythms and accompainments are quite silly and the demo tune is 'last christmas' by Wham,

It has an internal architcture that reacts differently to circuit bending than sample based instruments. A lot of people prefer bending it by cutting the data lines to the fm chip, like described here. I took the more 'traditional' route of just connecting more or less random pins via a switch matrix, mostly because someone came up with that idea after I bent mine. In practice, this means that my configuration is less easy to control, making the output a lot more chaotic than what would be achieved by cutting the data lines.
With my method, sound data seems to get randomly mixed with bits of sequences, which generates these incredible complex patterns out of nowhere. Quite a bit later I found out that the bends also affect the MIDI output, making it spit out endless streams of glitched data, which will be interpreted as notes by whatever MIDI instrument you connect to it.

I used it a lot with the Qyphone, as its slightly cheesy sounds in my opinion worked well with the note chaos coming from the Yamadore. It sounded like a drunken robot piano player.